Tilicho Lake trek: the highest lake in the world!

Tilicho Lake trek: the highest lake in the world!

The Tilicho Trek starts from Manang. This town is reached by a six-day walk from Besi Sahar, which is in turn connected by bus to Pokhara (four hours) and Kathmandu (seven hours). One can reach Manang from Besi Sahar by shared jeep. The ride is about six hours long and costs NPR 5,000 (about 40 euros). The road is dangerous and it is quite scary-the Nepalese drivers are really good!

Manang is one of the largest centers on the Annapurna Circuit. I highly recommend treating yourself well! I slept great at the Tilicho Hotel: hot shower and pastries!

From Manang, you leave the Annapurna Circuit route (marked by a white-red sign), and go in the direction of Khangsar (white-blue sign).

It takes about two and a half hours to reach Khangsar. Initially you follow the main road, but after about two kilometers there is an opportunity to take a path – shortcut. At Khangsar the road ends and the path gradually becomes steeper. In the distance we begin to see the scree slopes that distinguish the Tilicho Trek, and the adrenaline starts to build.

After passing a monastery, you arrive at Shree Karka. Located at an elevation of 4050 meters, it is the last village before Tilicho Base Camp. Shree Karka is therefore the perfect place to have lunch before embarking on the Tilicho scree slopes.

Tilicho lake trek: from Shree Kharka to Tilicho Base Camp

From Shree Karka we climb steeply for about half an hour. A suspension bridge marks the beginning of the Tilicho scree. You really have to be careful here!

In fact, for about a mile you walk on the famous Tilicho scree slopes. In this mile and a half, which is never flat (mostly downhill in the section leading to Tilicho Base Camp) there is a risk of stones, small or large, falling from above. A few fatalities, unfortunately, have happened, even in recent years. Local guides suggest to always look up and listen to the sounds of the mountain – you need a firm step!

The section of the Tilicho scree slopes is about 20 minutes long-I admit that my adrenaline went through the roof! In fact, it is quite a dizzying stretch as well!

In total, from Shree Karka to Tilicho Base Camp is six kilometers: you have to calculate about two hours of walking. Tilicho Base Camp consists of three shelters: they are generally very crowded, but you can always find a bed to sleep in.

Tilicho lake trek: from base camp to lake

The day leading up to Tilicho Lake starts very early. In fact, always the local guides advise against crossing the scree slopes in the late afternoon, as the afternoon wind is usually stronger than the morning wind and may dislodge the stones.

On the way up, I had the chance to see a beautiful sunrise!

Once I arrived at Tilicho Lake, I was impressed by such beauty! In late November 2022, I found a spectacular day with no wind. In front of me I had the lake considered ‘the highest in the world.’ The frozen Tilicho Lake, with snow on the side, was a truly exciting sight!

I stopped for about an hour to admire such beauty!

The descent to Tilicho Base Camp was tiring-the scenery, however, was once again fantastic!

Tilicho lake trek: from Base Camp to Yak Kharka

From Tilicho Base Camp we return to Shree Karka. Once again we go from the scree slopes, which always need attention! Upon reaching Shree Karka, take the left turn marked Yak Kharka. From Shree Karka there are no guesthouses until Yak Kharka: best to stop for something to eat before embarking on the trail! As soon as you leave Shree Karka, there is a viewpoint that allows you to see the Manang valley from above-the view is spectacular!

After the pass, a long steep descent begins, leading down to the valley of Yak Kharka: one must be very careful of any icy spots, especially in the middle of the forest!

From Shree Karka to Yak Kharka you have to calculate about three hours: depending on how tired you are, you may want to sleep one night in Shree Karka. Once you reach Yak Kharka the Tilicho Trek is complete: you have successfully returned to the Annapurna Circuit!

Stage 3: Shree Karka – Yak Kharka (some may think of arriving at Thorong Phedi, so as to descend Thorong La as early as the next day).

This adds only one or two more days to the original Annapurna Circuit schedule: in fact, without the detour the itinerary would be Manang – Yak Kharka and, the next day, Yak Kharka – Thorong Phedi.

On the other hand, many undertake the Tilicho Lake trek without a guide: better to walk in groups anyway! 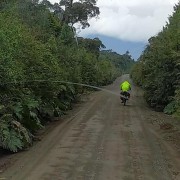